This was how I started my first serious blog post way way back: I went on to a trip to Bangalore, and I thought I might not be able to come back. So I decided that I had to write down my story somewhere online so that other people can know my story somehow.

I am not saying I might have the same adventure this time. At least not as miserable as the Bangalore situation. However according to my schedule it seemed like it was not too far either.

Let me tell you what just have happened on the Day 1, and later on I’ll come back to talk about my amazing schedule.

So I was on the midnight flight to Singapore. When I say midnight, it really was. SQ218, 1:05 AM boarding on Melbourne side, arriving at 5:45 AM on Singapore side. 7.5 hours, not too long. Just enough for 1 dinner, 2 movies, and 1 breakfast, and you are done. Touch down and you got a bright new day in front of you.

You heard me right. Yes, a 1:05 AM flight, but still serve you dinner, and that must have been almost 2:00 AM when they literally placed the meal on my foldable table. And I did finish them all, while watching my movies.

The first movie was Gravity. Originally I was hoping that a movie about one actress talking to herself for 2 hours in space should help me dived into deep sleep right away. But at the end it was the shooting (like hell) scene by Matt Damon in the second movie (which in theory is located at one layer down in the atmosphere compared with where Sandra Bullock was) Elysium that did the trick.

But you could have done the maths and realise by now that not too long afterwards I would have got waken back up again to take the breakfast at 3:45 AM local time. And that’s it. Slept 2 hours max, and done. Time-wise, very efficient, but productivity-wise, not quite. I felt like a zombie when I stepped into Changi Airport.

So now I was in Singapore. Well, Singapore Airport to start with. It was a short stay for me there. Just 2 days. So I didn’t bother to get a local sim card. Instead I just stayed at the arrival hall connecting to the Wifi@Changi for my connection. One thing I learn when I am on the road is to always juice up my power whenever I have a chance, or else i need to use my devices one at a time and swap them one by one like how Rambo always chuck away his emptied machine gun and pull a (pair of) pistol from his back (instead of reloading).

So for that I found a power point on a pillar with the lock of its cover already hacked by someone else. Of course I thanked him/her and plugged myself all in. Seriously I wished I could do that on my zombified body but at least my brain and my soul were saved (for now, at least that’s what I thought I was) when I was connected and powered. But I also realised that there was after all not much use to have a fuelled mind if my body had already turned into a zombie.

And there was exactly what happened. By the time of sunrise (which often something zombies don’t go too well with) and I decided to take a cab to the city, my human brain was completely gone. I towed my body out the airport building without getting any Sing Dollars exchanged, got into a taxi without knowing it was cash only, and when I arrived my office front gate I was only able to use my autopilot mode to deal with the annoyed (and annoying) cab driver about the cash (or lack of) issues.

So, 5 minutes later, I got off the cab, wandering around the front gate in and out a few loops, and finally realised that I got dropped off at the wrong tower. Reluctantly I tumbled down the stairs and tunneled through to the other side of the road. Hmm, that felt so weird…. How come the trip down the stairs walked like a breeze… …?

And that’s the exact point where the magic a-ha moment kicked in, and I knew my human brain was back, with fears (well, zombies have no fear…): “Oops, where the hell is my luggage?” “Damn it is still at the trunk of the taxi!” Well, it seems that my autopilot wasn’t able to pick THAT up!

The next thing I knew, I was back into full gear fighting mode again, like the typical hero in those Hollywood movies got beaten up like shit for a best second half of the movie, but then in the second last scene magically stood up again and crashed the bad guys with the last bullet. My last bullet was my fully charged phone and the cab receipt. I called up the cab company and waited for their Lost & Found line to answer, for 25 minutes.

That was quite a good 25 minutes because I got a chance to stayed at the taxi stand and observed hundreds of people got dropped off and walked into the building, with all different faces. Something that I usually don’t had a chance to do in my normal life.

So, these incoming people: Some obviously had a very tough overnight OT work and needed a thick makeup to cover up her black eyes. Some you can tell they were very much in love, especially last night, just by how they did their goodbye kisses. And some, you know just by how she looked at you (but at the same time not really looking at you) when she got off the cab, and how she then shook her hair and hips, you knew that this was exactly what she was looking for: to enjoy being checked out by strangers, like me, at the office tower entrance.

I was having so much fun that I almost forgot I was on the waiting tone with that repetitive and flatted jazz music on. Finally someone picked up the line and hunted down that already annoyed taxi driver for me. Turned out he was already back at the airport waiting for the next pickup. I got the deal with him by paying the return trip back to me. Another 25 minutes later, I got back my luggage. Oh well, originally I had the chance to renew my entire wardrobe completely including underwears and ties. Now I just have to wait for my next excuse.

As you can tell, I was completely wracked by then. Subsequently after that I had 6 hours meeting including a business lunch, and all went well with good commercial outcome, but nothing really worth telling compared to my zombie story above.

Stay tuned for my Day 2 story. 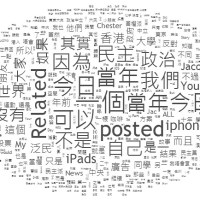